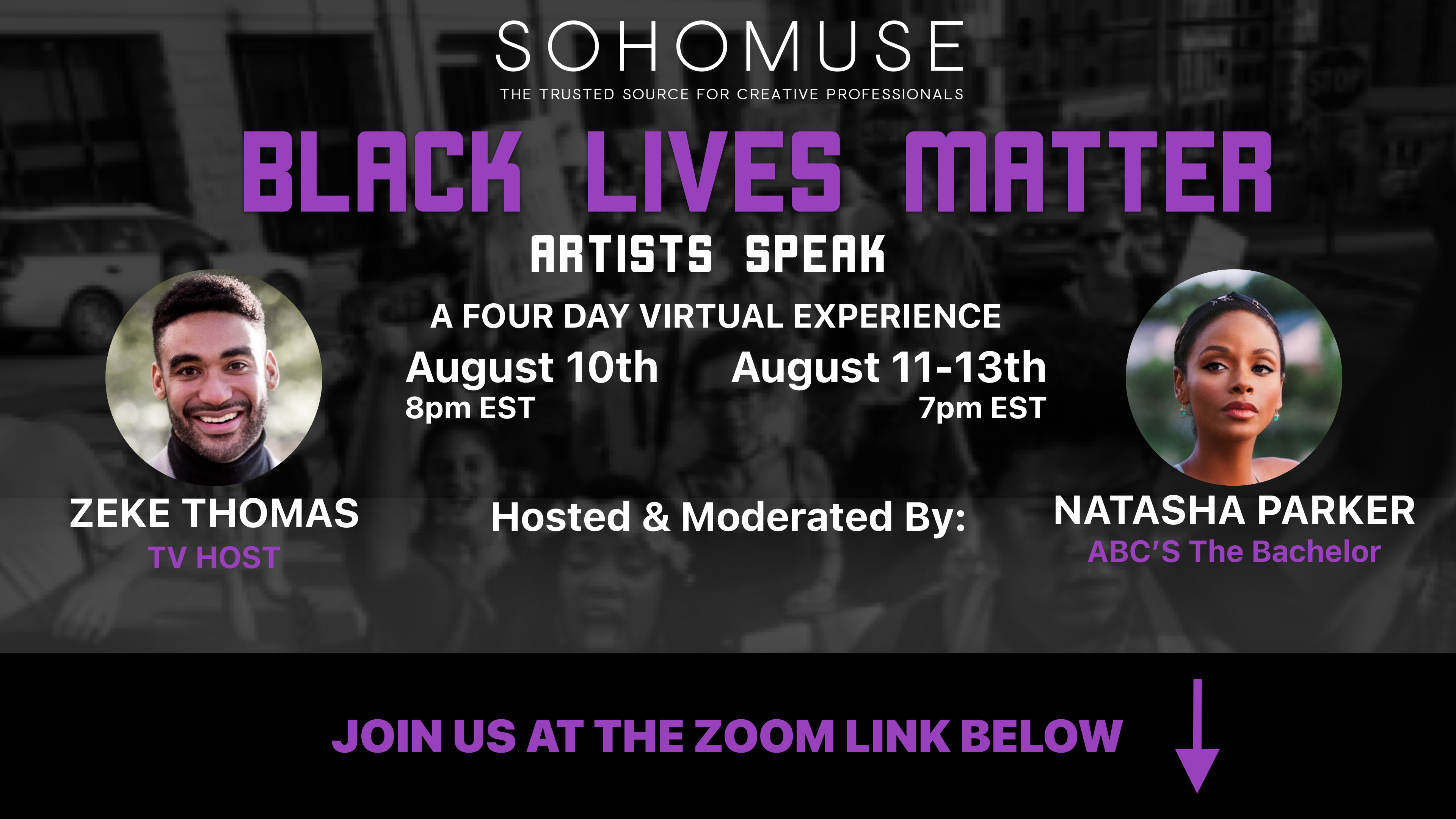 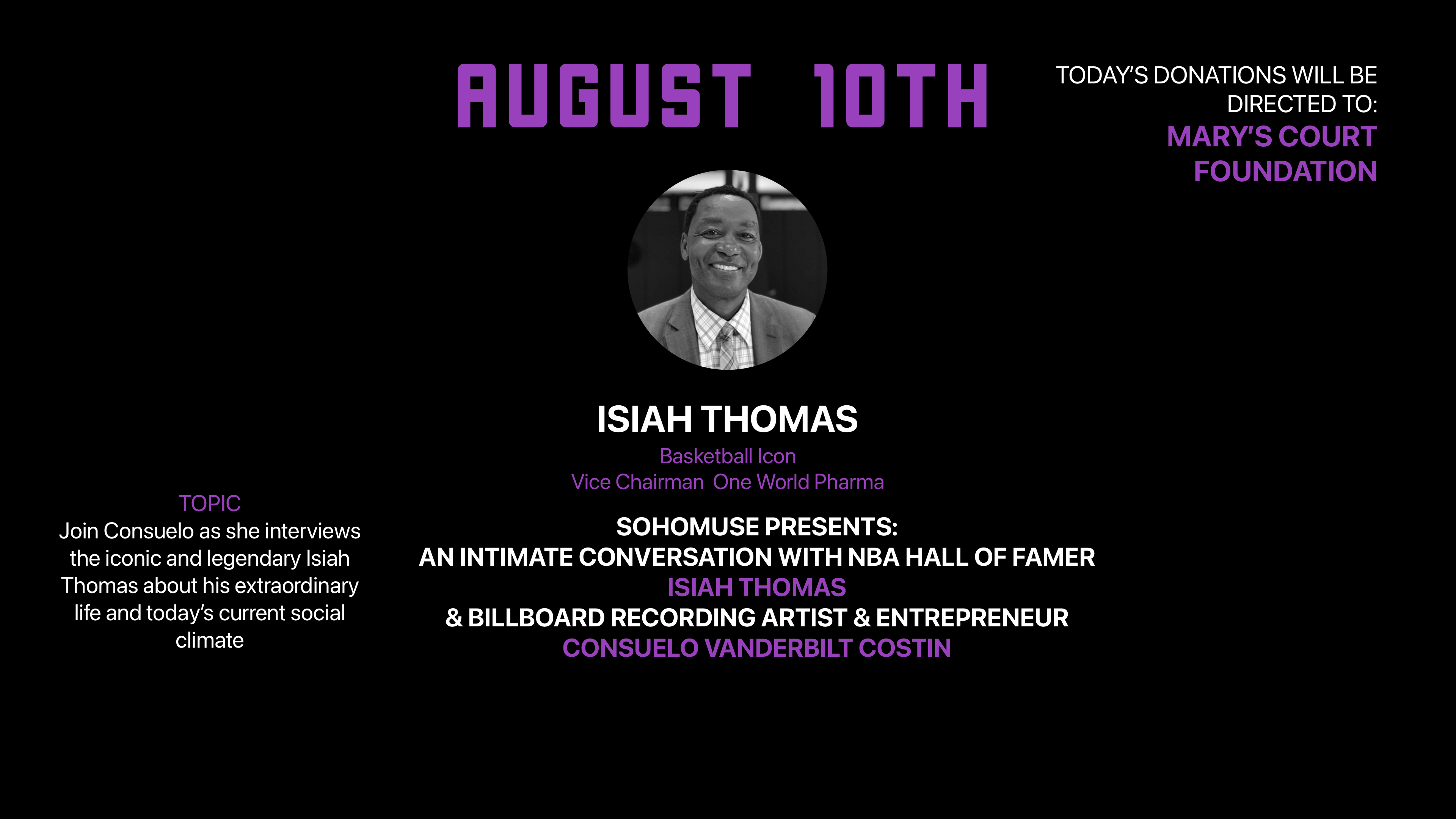 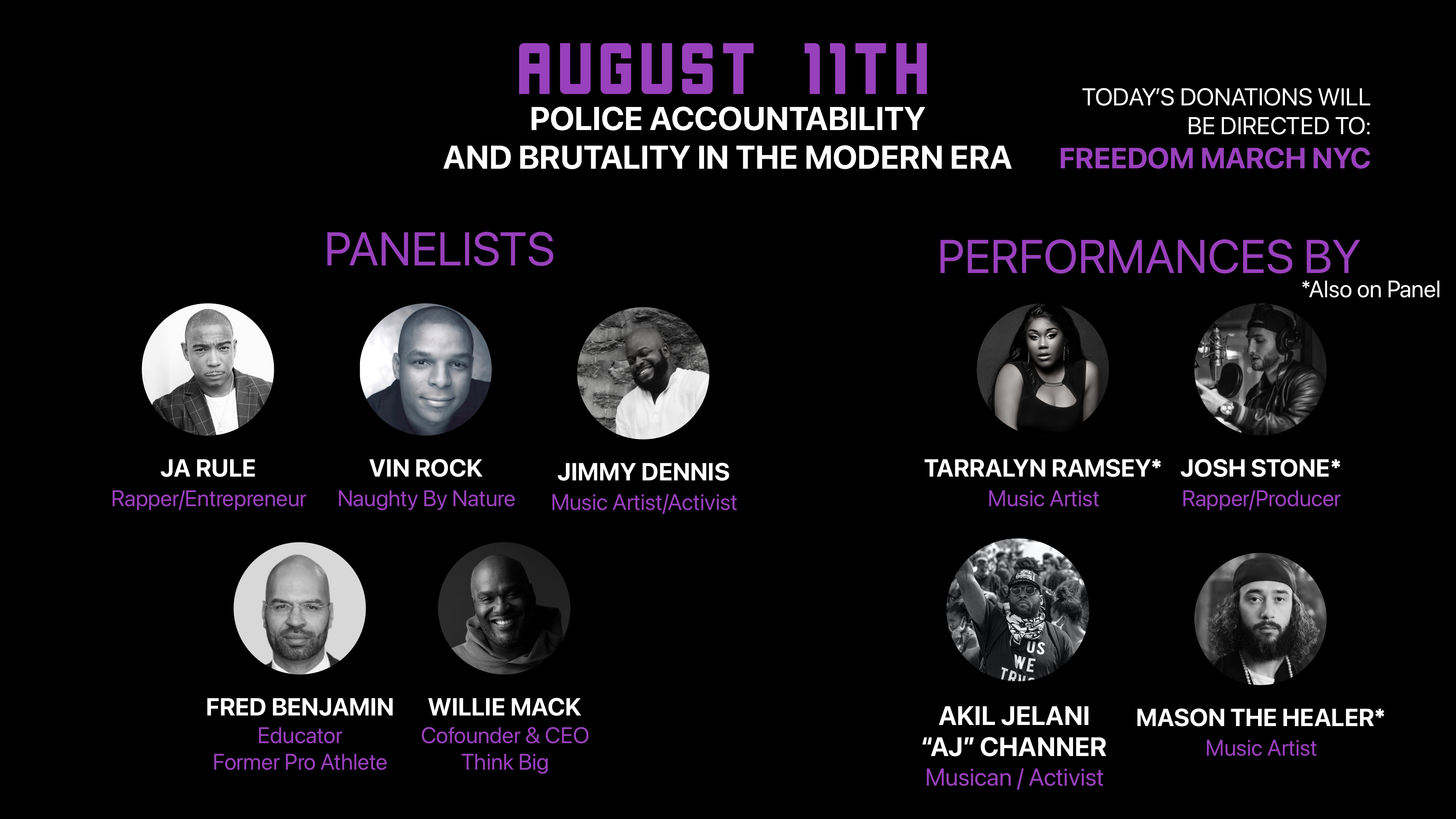 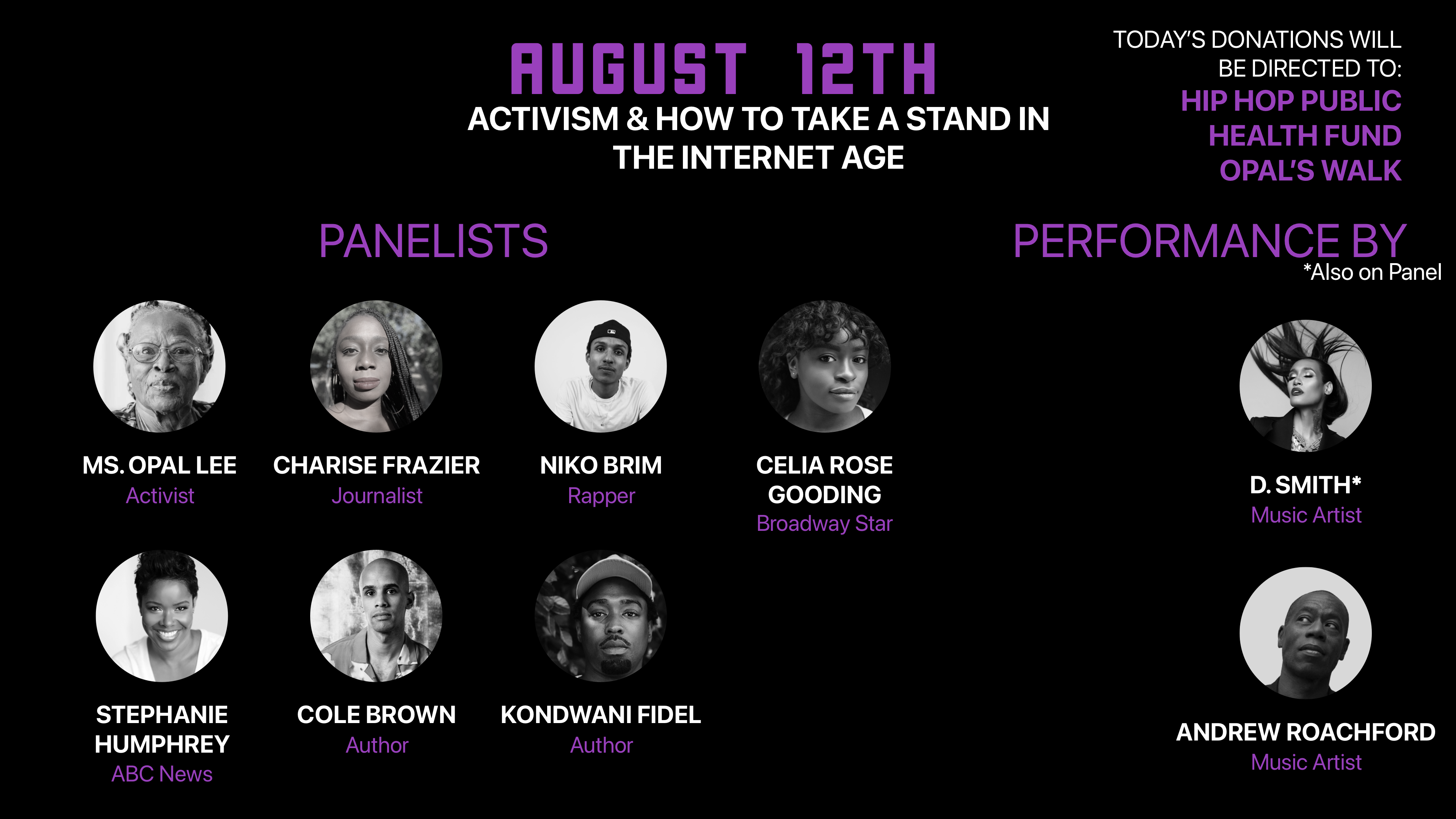 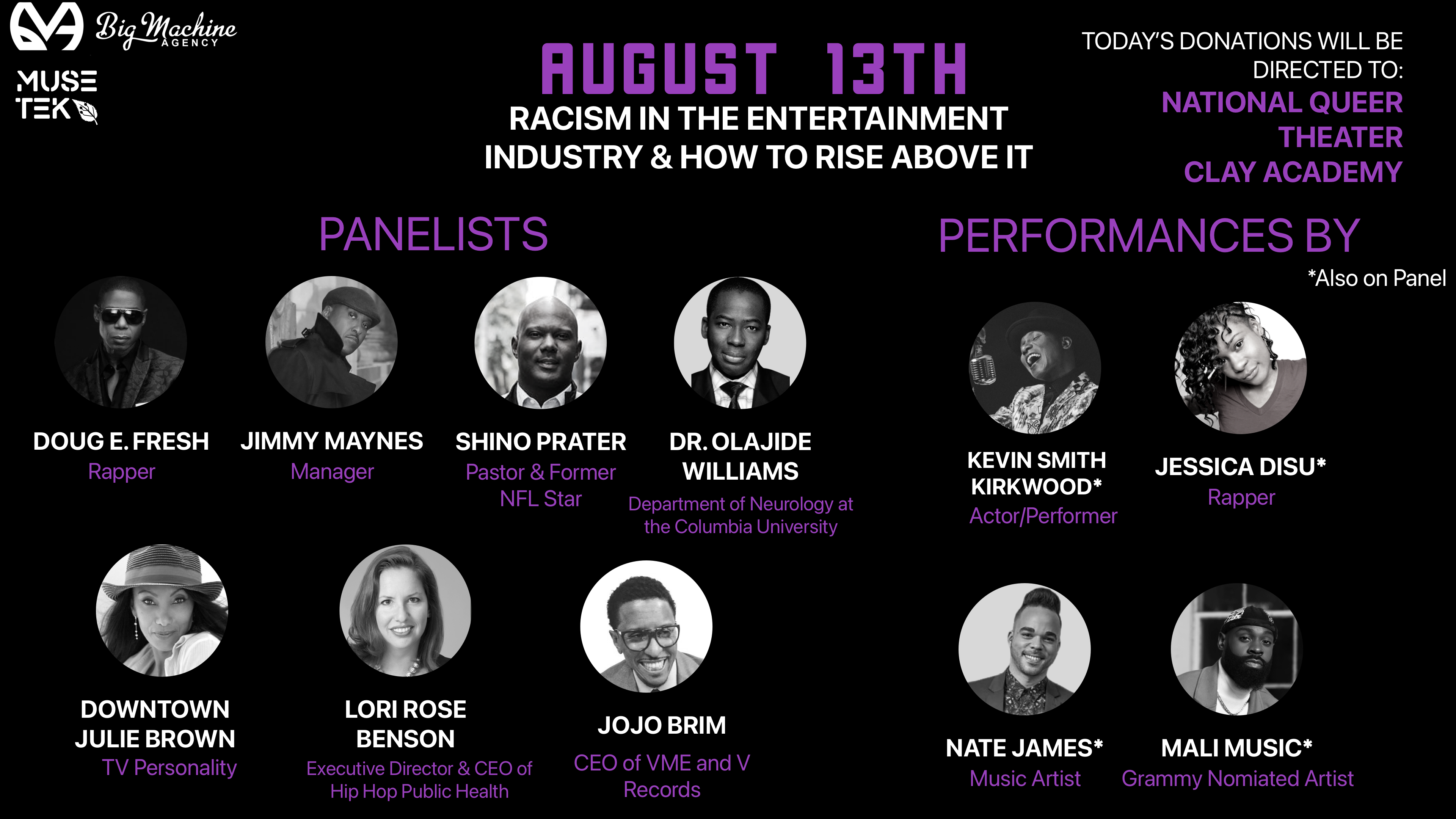 SohoMuse, the leading platform for creative professionals, announced its first virtual entertainment event series in celebration of the Black Lives Matter movement. The event will be held from August 10th to August 13th and will be co-hosted by renowned music producer Zeke Thomas and The Bachelor's Natasha Parker. The virtual series will bring together artists, leaders and academics to hold powerful conversations and performances around the history and path moving forward following the Black Lives Matter movement within the entertainment industry.

POLICE ACCOUNTABILITY AND BRUTALITY IN THE MODERN ERA

In 1992, R&B singer Jimmy Dennis was wrongfully convicted of murder. He spent 25 years in prison, but he never gave up on music or justice. Jimmy will be playing his new single "Skin I'm In" at the event.

Fred Benjamin was the Athletic Director for St. Thomas Choir School in New York City, Academic Dean of the Vision Quest program (now closed) for adjudicated youth, an advisor, diversity representative, instructor and basketball coach at the Hotchkiss School and the Director of Academics for Student-Athletes at the University of San Francisco.

Co-Founder and CEO of Think BIG, Willie leads the company's executive management, creative and strategic vision. With his extensive background in social entrepreneurship, executive leadership, global brand marketing, and storytelling, Willie is endlessly inspired by the collaborative process and understands firsthand the power of art, technology, and cannabis to stimulate both creativity and community on a global scale.

Mason first earned his notoriety on the UK tv show The XFactor as ‘Mason Noise’.  As well as a singer/songwriter, he is now a Reiki Master teaching alternative holistic healing techniques and meditation.

Josh Stone is more than just a Rapper, he’s also a Producer, Artists, and CEO of his own label Real Vibez Only Inc.

Tarralyn Ramsey is an American gospel musician and artist. She began her music career in 2000, with the release of the religious Tarralyn Ramsey album by Verity Records. This would be her Billboard magazine breakthrough release on the Gospel Albums chart.

AJ Channer (FIRE FROM THE GODS)

Armed with a bold hybrid of metal, rock, and hip-hop, AJ’s band, Fire From The Gods punches through genre and cultural barriers and make a provocative and powerful statement with each subsequent album.

ACTIVISM & HOW TO TAKE A STAND IN THE INTERNET AGE

Natasha has worked in entertainment on and off-screen. On-screen, Natasha is a reality television personality. Behind the scenes, she is an established TV Producer and Marketing Director.

The 93-year-old activist and lifelong Texan has campaigned for years to make Juneteenth a national holiday.

Charise Frazier is a multi-media journalist and a pop-culture news junkie who is passionate about making social change through writing. Charise is currently a news writer at iOne Digital, covering social justice and politics at MadameNoire, HelloBeautiful, and NewsOne.

Stephanie Humphrey is a former engineer who became the technology contributor to nationally-syndicated talk show The Harry Show, hosted by Harry Connick, Jr. and is currently a contributor to Strahan & Sara.

Cole Brown is the author of Greyboy: Finding Blackness in a White World.

Niko Brim is a Rapper and producer who became known for hits such as "Man on the Moon - The Pre Show" and "The CoMission - 1st Quarter."

Kondwani Fidel is the author of Hummingbirds in the Trenches and Raw Wounds.

RACISM IN THE ENTERTAINMENT INDUSTRY & HOW TO RISE ABOVE IT

Barbadian-American rapper Doug E. Fresh, born Douglas Davis, got his initial notoriety for being the original human beat-box, inventing a method to imitate a drum machine using breath control through the teeth, lips, and gums. He remains an active force in hip-hop music, appearing as a guest artist on many records, to the present day.

Jimmy Maynes offers an exceptional record of achievement directing high-level entertainment operations, with a strong background in the music industry, directing talent management, A&R, and event management, and multiple gold and platinum albums to his credit.

Dr. Olajide Williams is the Founder and Board Chair of Hip Hop Public Health. He is a Professor of Neurology (with tenure) at Columbia University and Chief of Staff of the Department of Neurology.

Julie Dorne Brown, better known as Downtown Julie Brown, is a Welsh-born actress, television personality, SiriusXM DJ, and former MTV VJ. Brown is best known as the host of the television music show Club MTV which ran from 1987 until 1992.

Jojo Brim is the CEO at VME Records. He is also Manager & Consultant to Platinum Recording artist, CEO's and Entrepreneurs worldwide.

Kevin Smith Kirkwood is a NYC based Broadway Actor/Singer/Dancer. He performed in the entire six year Broadway run of the hit musical 'Kinky Boots' and most recently guest starred on 'Katy Keene' on the CW' Network!

Andrew Roachford MBE is a British singer-songwriter and the main force behind the band Roachford, who scored their first success in 1989 with the hits "Cuddly Toy" and "Family Man".

While the event is free, we recommend that attendees support charities that will be promoted during the event.